Rachel had the good fortune to stumble across yoga in 2009, whilst studying French and Philosophy at the University of Nottingham. In 2010 she began practising Ashtanga yoga with Level 2 Authorised teacher Paul Kleesmaa and upon her return to Leeds she began daily practice with Level 2 Authorised teacher Joey Miles.
She has since travelled to Mysore, India, on four occasions, to study with Sharath Rangaswamy at the KPJAYI, the source of the Ashtanga method.
She has been certified to teach by the British Wheel of Yoga and Yoga Alliance, having completed a two-year alignment focused Hatha Yoga training with Joey Miles and Anna Asbhy at TriYoga London.
Rachel has been assisting in Joey’s morning Mysore-style Ashtanga classes since 2013.
Since her first yoga class, Rachel became aware of the powerful effect of yoga practice on her mental state and feels an immense gratitude for this practice, which has changed her life. It is this feeling of gratitude that motivates Rachel to teach, in order to help others and experience the same benefits.
Rachel began practising meditation in 2010 and since beginning Vipassana meditation (in the style of S.N. Goenka) in 2011, has completed a 10-day silent meditation course annually and continues to maintain a daily meditation practice. 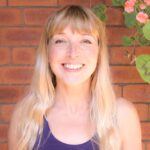 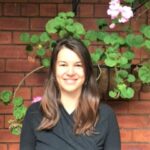