What Is The Core Anyway?

Searching For “The Core”
The “core” is one of those terms, much like bandha, that people throw around, sometimes flippantly, whenever they’re working with a challenge in yoga practice. But, what is “the core” and what does it have to do with yoga?

How do we define the core?
You might be surprised to learn that there is no single anatomical or medical definition of “the core”.
Merriam Webster defines the word “core” this way: a central and often foundational part usually distinct from the enveloping part by a difference in nature.

Even in the medical/scientific community there are multiple definitions of what constitutes “the core” (Huxel Bliven and Anderson, 2013)

You can find someone who considers just about every muscle in the body as part of “the core” except the arms, legs, and head, although even the muscles on the back of the neck have been listed as “secondary core muscles” by some. That doesn’t get very specific or tell us much about what the core is.

Some of the most recent research defines the core this way:

“The core is the foundation of the kinetic chain responsible for facilitating the transfer of torque and momentum between the lower and upper extremities for gross motor tasks of daily living, exercise, and sport.”(Huxel Bliven and Anderson, 2013)

Between these definitions, we can get the idea that “the core” is something that has both a location in the body AND has a function.

Where did the term “the core” originate?
You’ll find lots of references to “the core” among dance, pilates, yoga, massage therapy, physical therapy, and other movement modalities. The specific origin of the phrase as we see it used today is uncertain. I haven’t been able to track down a source for the first person to use the phrase.

Historical ideas of the core
To better understand and gain perspective on the core, let’s take a walk through three separate perspectives from influential movers on what we will call “the core”.

Joseph Pilates (1883-1967), Ida Rolf (1896-1979), and Sri T. Krishnamacharya (1888-1989) were contemporaries. All lived at about the same time. All were explorers in the area of functional movement. All shared a part of their central thesis: There are some muscles, centrally located within the body, that when well trained, can result in the ability to execute actions that appear both strong and light, without being rigid, hard, or forced. All agreed: this kind of relationship with deep internal musculature is subtle and has wide-ranging effects that are physical, mental, emotional, and even spiritual.

Joseph Pilates – The powerhouse muscles
Joseph Pilates was the creator of the Pilates method of developing strength and flexibility in the body to maximize ease in functional movement. He used the phrase, “the powerhouse”, to refer to what we might now call the core. The powerhouse encompasses musculature that Pilates practitioners consider to be central to moving with optimal strength and grace in gravity and through space. Joseph Pilates emphasized training the musculature around the pelvis and training the muscles around the torso for the stabilization of the spine.

The Pilates Institute of America posts an abbreviated list of muscles that are included in what they refer to as “the center” or Joseph Pilates’ “powerhouse”:

Ida Rolf – The myofascia of the core and the sleeve
Ida Rolf was the originator of the structural integration method of bodywork, often called Rolfing. You can read a bio and a history of her work HERE. Ida Rolf presented a slightly different idea of the optimal function of these central areas of the body. She understood the body as having a core and a sleeve. Those who are practitioners of her methods of bodywork consider the superficial layers of myofascia (such as abdominal muscles) even in the central areas of the body to be the sleeve and only the deeper, intrinsic layers of myofascia are considered to comprise the core (such as iliopsoas). She particularly emphasized the role of the iliopsoas as central for supporting optimal structure for the body in gravity and as a mobile keystone for connecting the structure of the spine to the pelvis.

Krishnamacharya – How does the core apply to yoga?
There is a relationship between the idea of core muscles and bandhas. Krishnamacharya recognized that control of prana could start through attention on muscles. While Krishnamacharya may have had a different desired effect of muscular control, more of control of subtle energies and development of concentration, and less of developing perfectly toned “yoga abs”, the actions to begin the work still resided in the body, just as with the work of Joseph Pilates and Ida Rolf.

Krishnamacharya, in Yoga Makaranda, describes the action of uddiyana bandha: “Draw in the navel in such a way as to press against the bones of the back (spine) with the abdomen firmly pulled in.”

He describes mula bandha in this way: With the left heel, firmly press the kandasthana which is between the rectum and the genitals and pull the heel in tightly in order to close the anus. Pull in the stomach firmly and press it against the bones in the back (the spine). Bring in the right heel and place it on top of the genitals.”

Although Krishnamacharya is not listing out muscles, we do know which muscles must be engaged to to do the actions that he is describing. They include the musculature central to the body recognized by Joseph Pilates and Ida Rolf.

It’s interesting that there are parallels between the areas of the body Krishnamacharya describes as related to the bandhas, the “Powerhouse” described by Joseph Pilates, and the myofascial sleeve/core relationship described by Ida Rolf. You could consider that each of these master explorers of functional movement influenced a wholistic idea that in more recent times has been reported as a somewhat over-simplified idea of “the core”. What is common to all of these influential explorers of movement is an understanding that the pelvis and surrounding myofascia is the root of movement in the body, both in a gross physical sense, as well as energetically. Secondly, all three of these people also emphasized that a strong, yet flexible spine, stably rooted in the pelvis, is necessary for fluid, directed, and energetic movement in the world. Whatever names we give to these areas of the body, it seems clear it is worth our time to explore a relationship with them.

Anatomically, what muscles, tissues, and structures could be included in the core?

I’ve discussed muscles we might include in the core already in my article: Your Core Muscles – Deeper Than You Think, but here’s a list of muscles that we could include:

Why is there so much talk about the core?
Because, intuitively, it feels good to initiate movement from there! Although the body is far more than a machine, and we can miss important subtle aspects of movement when we take only a mechanistic view, from the perspective of physics, we can initiate movements with less work when we initiate movement from this central “core” place. From the yogic perspective, and that of Krishnamacharya, if we want to direct the subtle movement of energy using bandha, that initiation happens from a relationship with what in modern times we could call the core muscles.

Should I strengthen my core?
Just like when I talk about the psoas specifically, I don’t suggest that the answer to all problems is strength. What I recommend is that students cultivate a relationship with their core.

Too much strength in the wrong places actually gets in the way of efficient movement. Think of something very strong, but rigid, like a 2×4 board. If you stand it on its end, it’s very easy to push it over, although it’s still very strong, right? Think of a serious bodybuilder. They are super strong in some ways, but their range of motion can be very limited. A lot of strength in a few places can prevent the access to strength from other places. Now, contrast that with someone like a dancer who is strong, but flexible. You can push them from every direction, but they move with the push and don’t get knocked over. Hardness and rigidity do not equal strength.

Conclusion
We often use words describing physical attributes or actions to describe our mental and emotional goals for yoga. We say things like, we want to be flexible in changing situations or we want to be steady and strong in difficult times. It seems then that the physical expression of our experience and our mental and emotional experience are not entirely unrelated. Exploring how we can apply muscles in our body, like the core muscles, to move in a way that is controlled, but not rigid, and strong, but not inflexible, is how we can explore those ideas in a way that we can see and feel. It then becomes more possible to apply what we learn from that exploration to subtler moments and experiences in life.

An Insight into Teacher Training at the Yoga Spacearticles 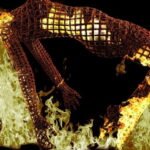 Are Some Movements Inherently Bad?articles